Go Toubun No Hanayome will be adapted into an anime again, after the first season which was released in early 2019, where at the first season of the anime go toubun no hanayome, this anime immediately received a lot of attention from otaku around the world. where anime with the theme of romance where there will be characters who are rejected is an anime with a storyline that many viewers like. 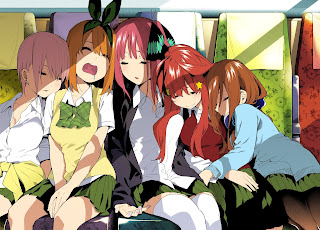 In Season 2 of the anime Go Toubun No Hanayome will still continue the story of uesugi and the twins 5. where at the end of season 1 we saw uesugi who looked very close to Miku, so in season 2 something new will happen, Uesugi will get closer to other characters besides Miku.

For those of you who have read the manga from Go Toubun No Hanayome, surely you already know who will win this battle, where is the battle between these 5 twins. but for those of you who haven't read the manga, be grateful for you. because you can still enjoy the Go Toubun No Hanayome anime calmly without fear of being spoiled for future episodes.

where in Go Toubun No Hanayome S2 it will be adapted by a studio called Bibury Animation Studios where this studio has animation quality which in my opinion is quite good, one of the anime that this studio has made is Azure Lane.

I personaly have been looking forward to the release of season 2 of the anime Go Toubun no Hanayome, which ever since I will get an adaptation for season 2 I can't wait for the release of season 2. but the anime go toubun no hanayome was reported to be Delayed but it seems that the news is still not true, which is the same as before where this anime will still be released in January 2021 or in Winter 2021.

Related Posts
Go toubun no Hanayome
Home
Give us your opinion